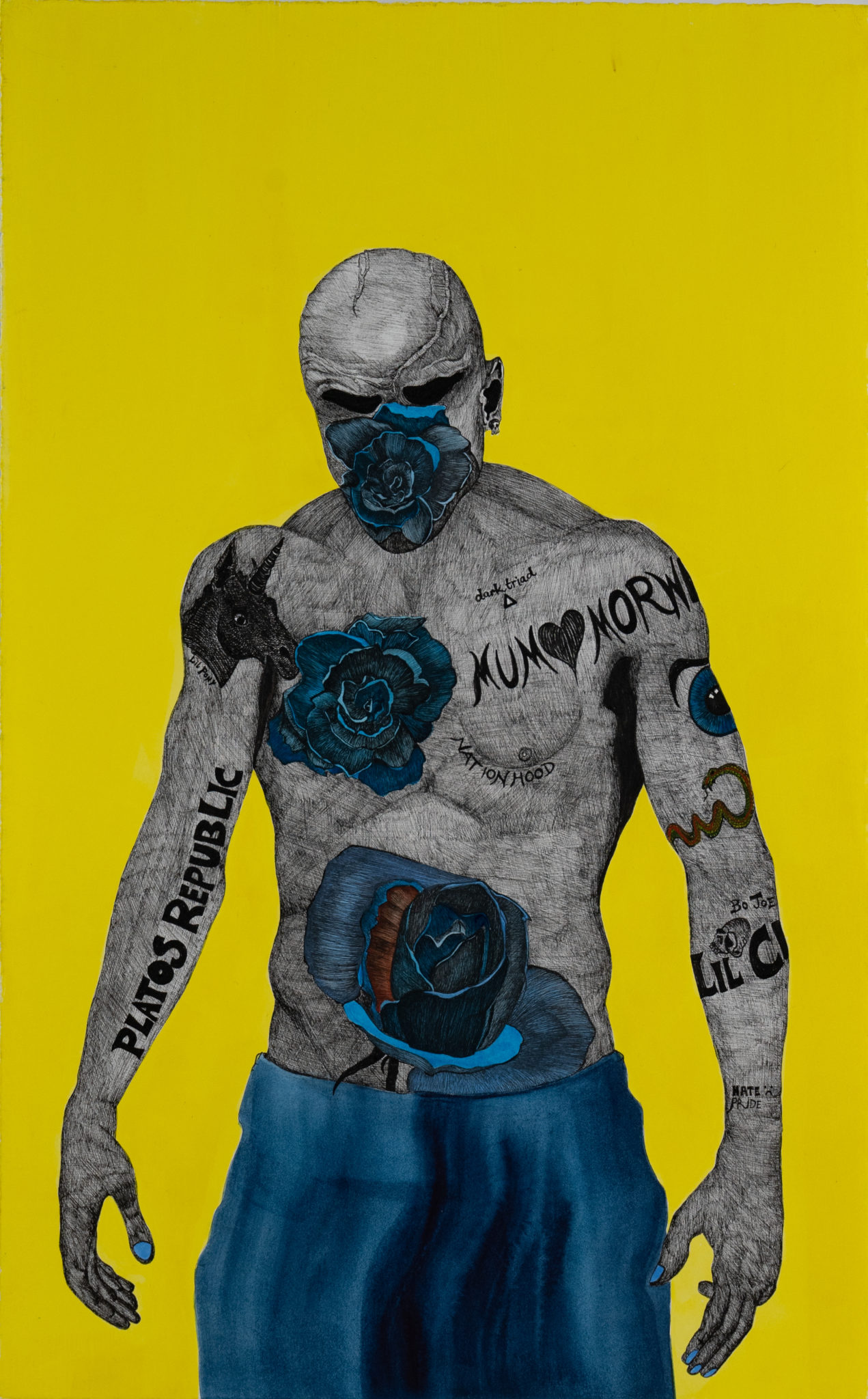 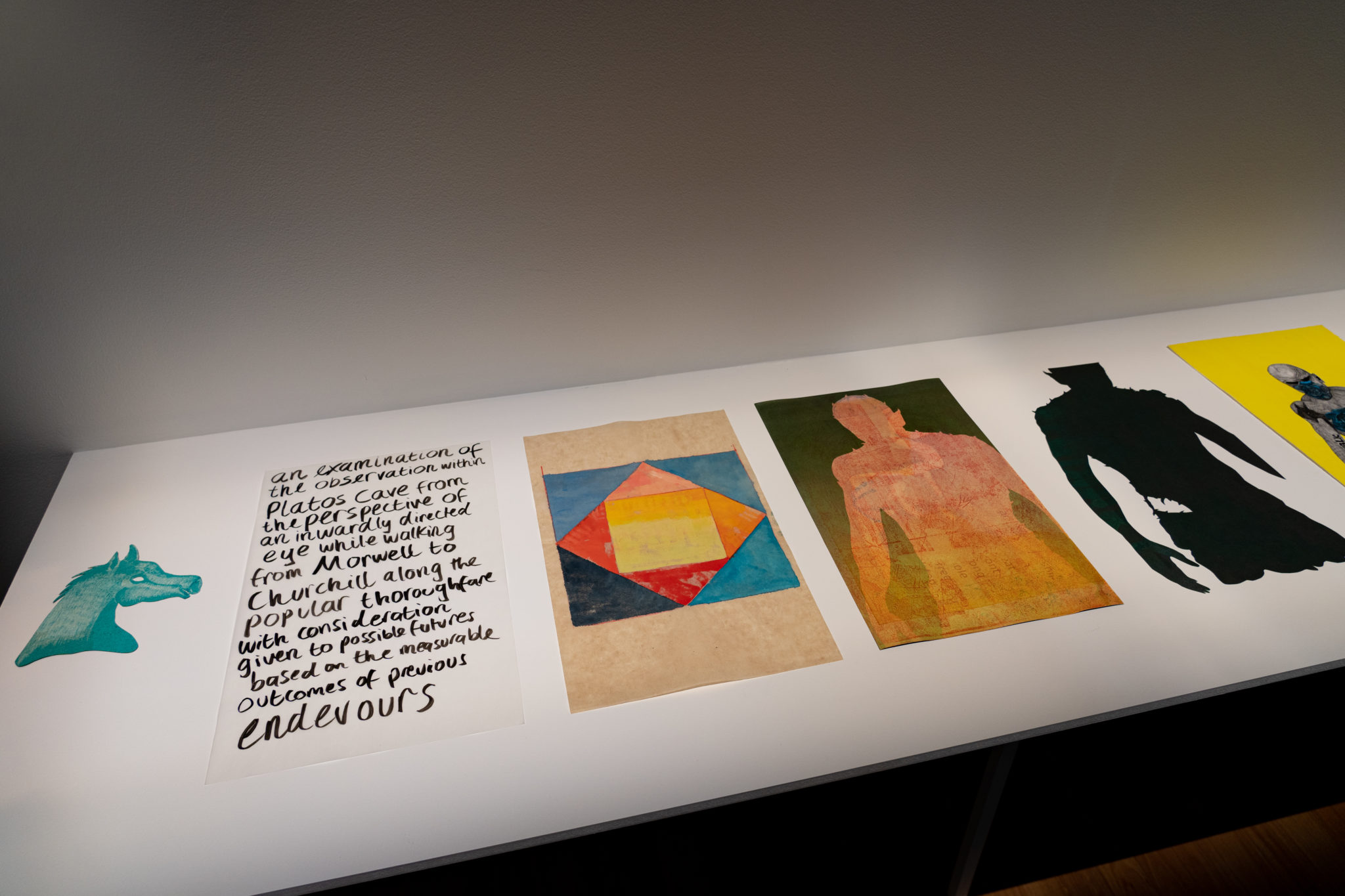 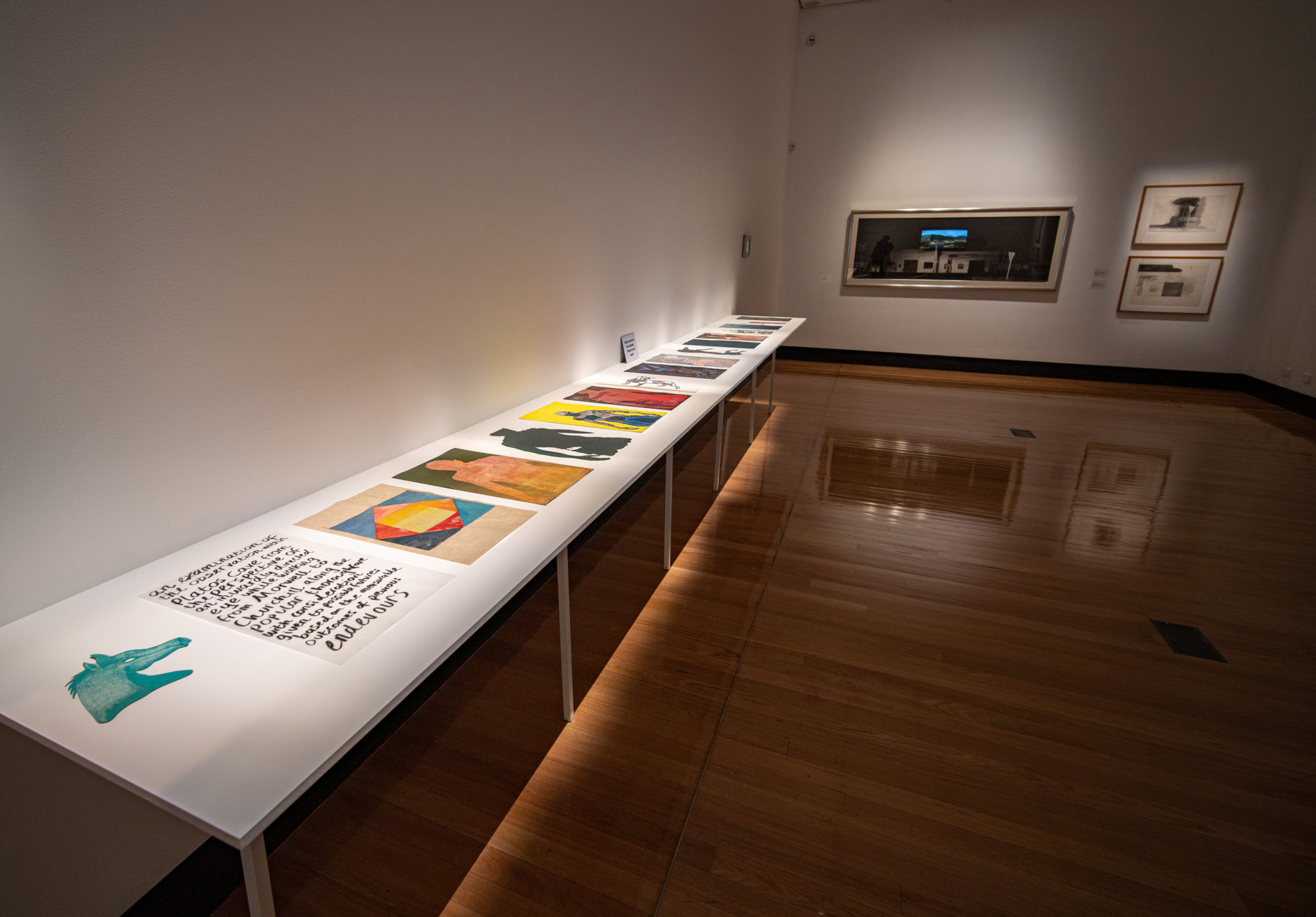 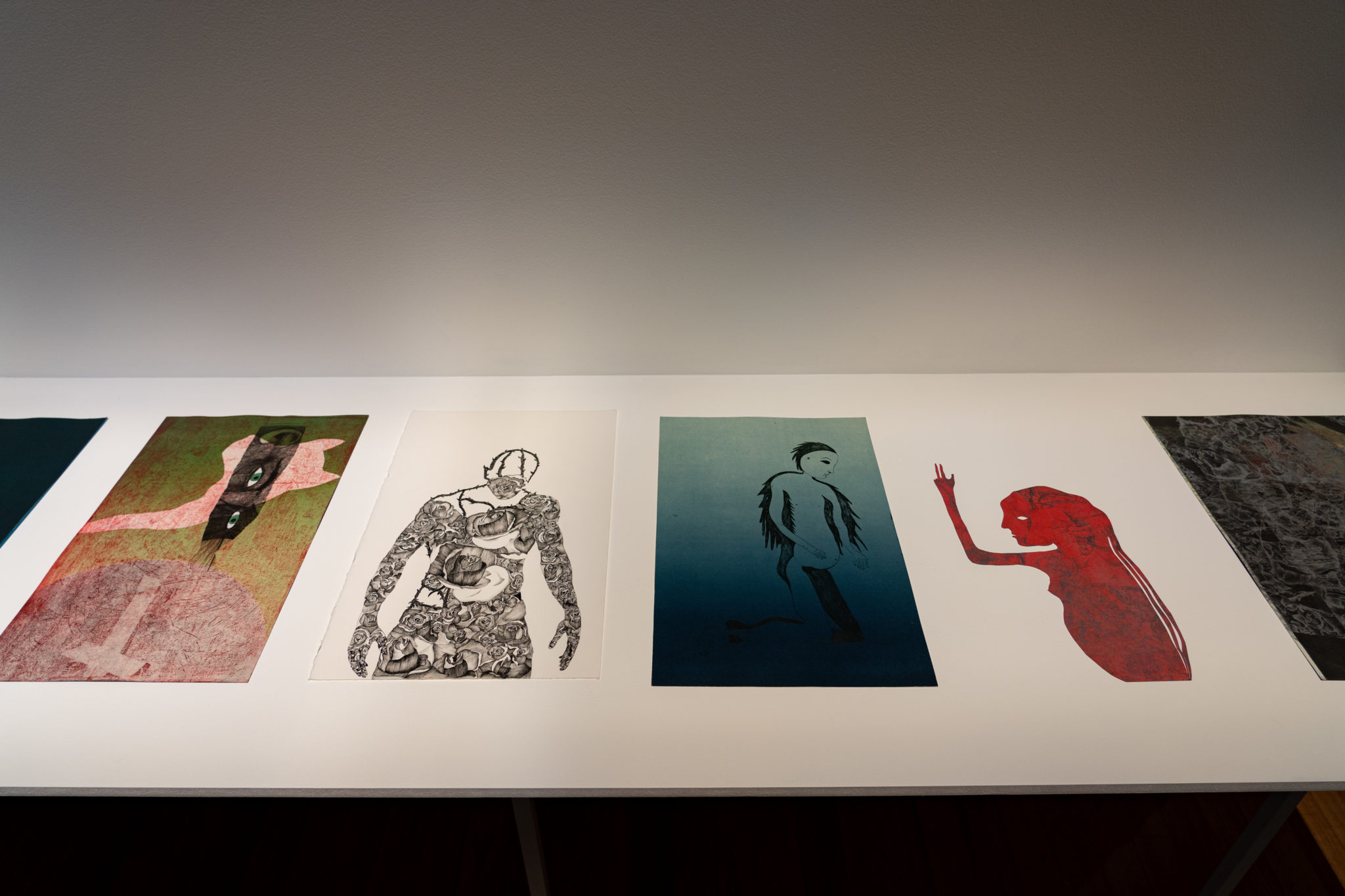 Kate Zizys is a dynamic and longstanding participant in the visual arts, life and social politics in the Latrobe Valley.

Dog Town is a box set of unique-state prints and drawings, including a stop-frame animation constructed from the works. The copper plate sheet and aluminium index plate at the top of the box set is a nod to printmaking processes and the industrial present of the Latrobe Valley. A walk from Morwell to Churchill forms the basis for the imagery and feeling of this artwork.

Zizys is a writer on art and social politics and a visual artist who employs printmaking, video, sound and performative elements in her creative repertoire. Her work is one that she would say is collaborative, even her printmaking work that by conventional approaches is ‘her work’. For example, in her work Dog Town, produced for the Anne Dyer Commission at Latrobe Regional Gallery, Zizys credits the box maker, the sound artist in the video, the company that she purchased her copper from, and the company who did the laser cutting for the title page. Her politics of inclusion and community drive this approach.

The work submitted by Kate Zizys is redolent with political questioning, expressed through highly crafted printmaking. The artwork strikes out at the brief presented by Latrobe Regional Gallery that, at least in part, asks artists to consider and imagine the future of the Latrobe Valley. For the artist, this is a future that may be hard to see. Her personal work history and health battles form part of this worldview, as do her social justice political perspectives and actions.

On her walk, the artist sees litter, roadkill, roads lacking footpaths and notes that Council could do better with litter management and provide safer bicycle options. But, as she wrote in a note about the work, Dog Town imagines future possibilities based on the measurable outcomes of previous endeavours with consideration given to the local status quo. The artist provides, if not scepticism about imaging a Latrobe Valley future, certainly perspective. The present and the past is inscribed in our landscape. Zizys brings this to the front, no matter how bleak.

If the artist can’t see the future concerning the Latrobe Valley, then perhaps as viewers of the work, we can think about the Latrobe Valley as being in a state of suspension. Cultural Studies academic, specialising in the Middle East, Judith Naeff describes a state she calls a ‘suspended now’. The ‘suspended now’ state is a sense of being stuck in the present, not moving forwards or looking back.1  Following Naeff speaking about Beirut, we might say the Latrobe Valley is a landscape that is at once charged by past events, and that is precarious, utterly exposed to harm. Our mining history is a scar on the skin. Hazelwood Power Station has been shut and demolished, but the debate about what to do with the vast black hole in the ground that threatens to devour Morwell is ongoing.

The figure that keeps re-appearing in the prints with tattoos and a menacing presence is Morwell itself. The mine fires are still burning in the people that had to endure them. The figure still has the light burning their eyes.
The artist Kate Zizys’ Dog Town references Plato’s Allegory of the Cave. The silhouette cut-outs (like the horse head) interleaved among the prints are the shadow puppets on the wall. In Plato’s allegory, the cave represents people who believe that knowledge comes from what we see and hear in the world – empirical evidence. The cave shows that believers of empirical knowledge are trapped in a ‘cave’ of illusions.

For Zizys, her artwork points to the twin phenomena of human and environmental degradation in pursuit of economic advancement. It proposes a correlation between destructive approaches to our environment and difficulty maintaining meaningful and healthy human relationships.

The symbol of the horse head appears as a silhouette appears in the artwork. This symbolism is significant because the ‘horse’ and the
‘horse head’ also appeared in a recent performance by the Owls of Nebraska, of which Kate Zizys is a member. While the horse can be seen as a symbol of labour and recreation, the horse head has other meanings altogether, which arguably fit with the sceptical view of the artist concerning the Latrobe Valley.2

The cave symbolises the world we live in. Few want to think about this grim truth, but it is apt to describe our reality.

1. Judith Naeff, Temporality and Landscape, Di’ Van, March 2021, Ed., Alan Cruickshank
2. Performance by Owls of Nebraska, Latrobe Regional Gallery, 16 May 2021. In the performance, performers wore horseheads, galloped and moved. In the suite of prints the symbol is more horse head than horse.