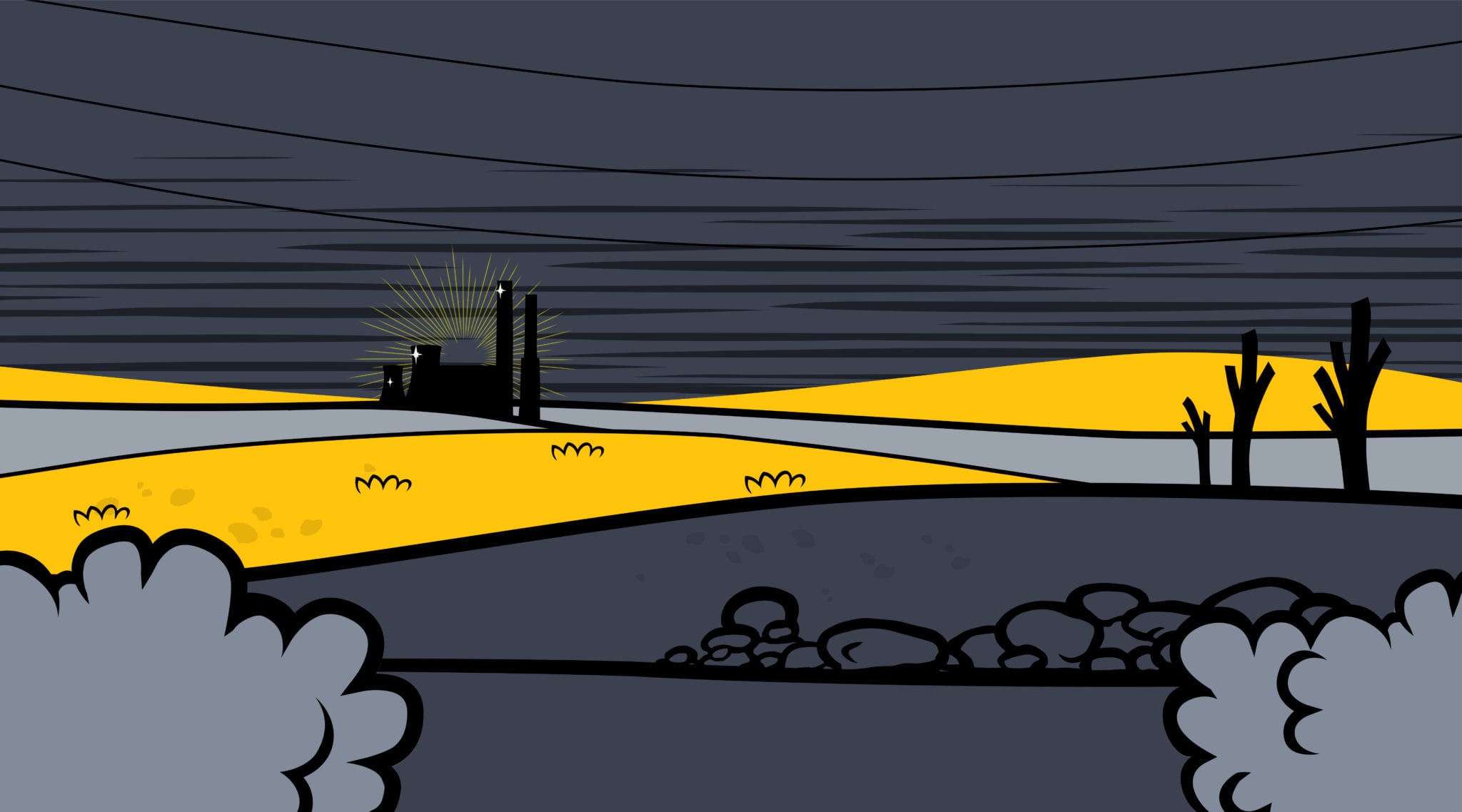 BEYOND THE VALLEY – A VOYAGE IN TIME
Martine Corompt

Beyond the Valley presents a 2-channel animated projection, that follows on from Corompt’s earlier 2013 animation titled M1 Homeward, which caricatures the journey along the M1 freeway as an animated, looping landscape of continuous repeating motifs of powerlines, trees and rolling hills. The viewer is caught in a 7-minute loop – a perpetual journey with no destination, where we never get ‘beyond the valley’ – we are only ever moving within it.

Long distance travel does strange things to the mind. Both the lived and the remembered experience can so easily edit down the landscape to a visual reduction. Duration, repetition, fatigue, all conspire to blur and generalise the exterior world into a collection of motifs, of distant hills, scattered trees, embankments, fencing and power-lines that become interchangeable. As the landscape rolls by, at a constant 100kph, the view through the window frame/screen becomes a moving image in the truest sense, a continuous pan through time and space.

But there are some landmarks that transcend these reductions and generalisations, special landmarks that remain etched in the mind and even take on a mythological status. Over many years of annual family holiday trips along the M1 from Melbourne to Mallacoota, the image of the power-station appears like magical apparition on the horizon, both wondrous and brooding, bringing to mind other well-known movie motifs, such as Emerald City, Springfield and the Magic Kingdom.

Beyond the Valley repurposes the use of repeating panning backgrounds – a common technique used in low-budget Saturday morning TV animation. Originally developed in response to economic restraints and largely attributed to Hanna Barbera studios in the 1960’s, the intention was to suggest movement across an expanded distance without the need for extensive drawings. A simple cheat process whereby a panoramic background seamlessly loops on itself to give the impression of continuous X axis movement. As a result, we notice a repeating pattern of images, the same three trees in a Scooby chase sequence, or the endless repetition of passing side tables and flower vases of Fred Flintstone’s house as he runs on the spot. This visual trope also functions as a gag, firstly because it candidly reveals the mechanical process to the spectator, but also because of the absurd nature of the spatial parameters of the animated world itself.

The spatial representation is both infinite in its capacity to loop endlessly, but also contracted in terms of how much visual information is actually represented: an impossible world of eternal sameness and repetition. With Beyond the Valley this gesture of visual reduction as economic cost cutting becomes both humorous and tragic when applied to the contemporary Victorian landscape.

David Haberfeld’s score for this work taps into the electronic nature of the representation, made entirely using a modular (Eurorack) synthesizer consisting of analogue and digital voices. Sounds/voice are sequenced polyrhythmically, echoing the repetitive layered looping of the animation and the long-distance road trip, both inducing a restless trance-like state and suspending the viewer in a perpetual present. 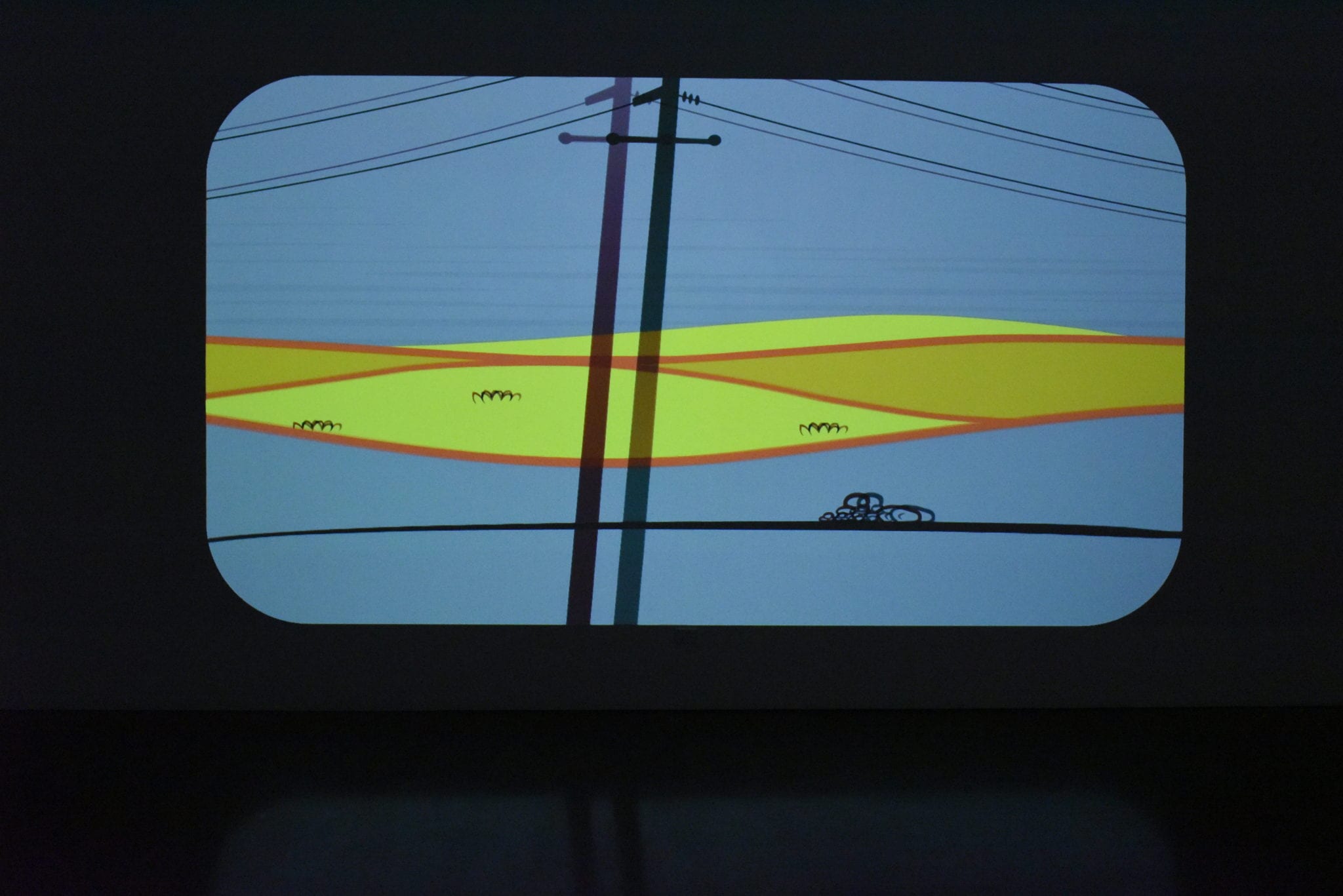 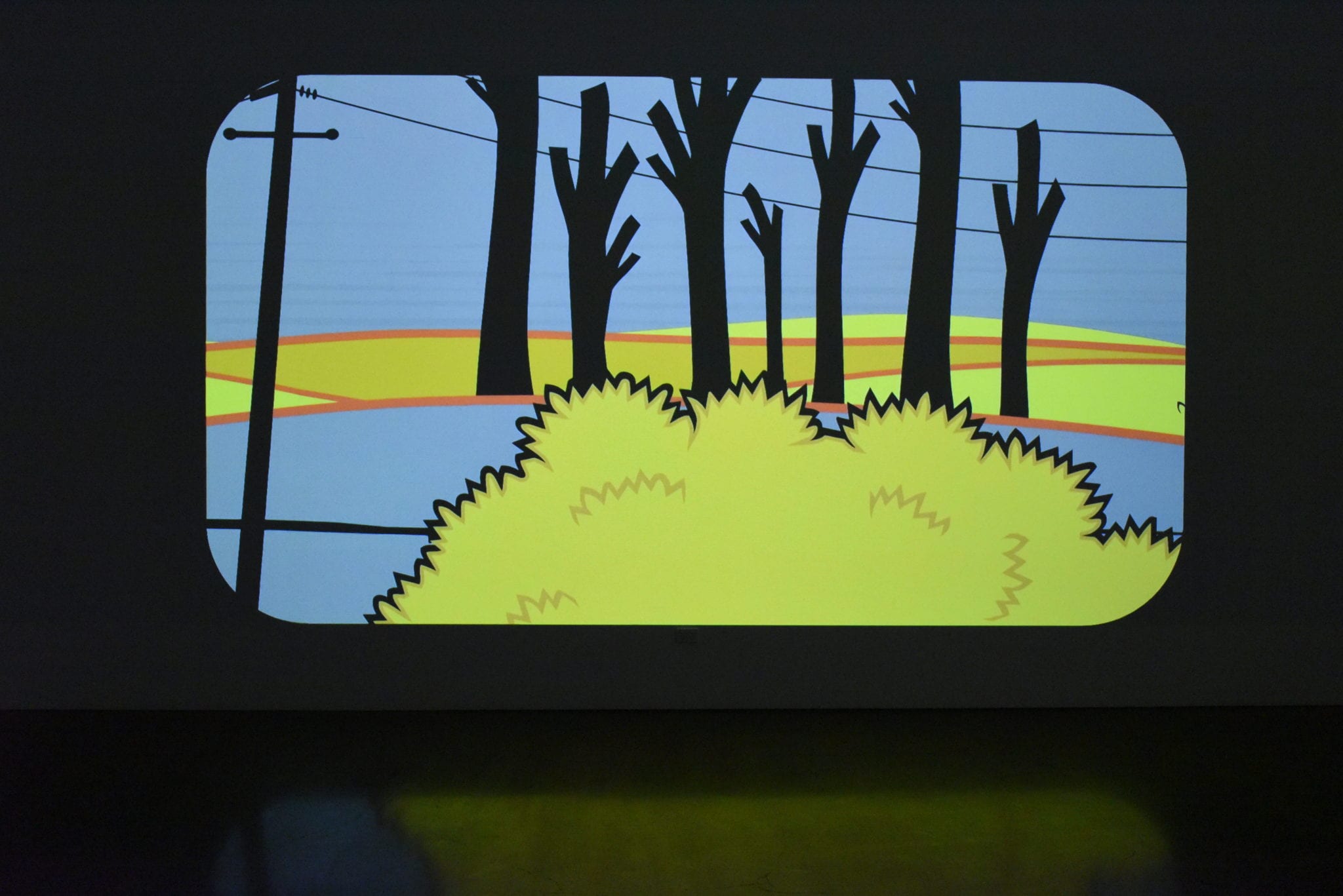