Take a peek inside our collections and discover the themes and ideas behind them.

LRG is situated in Morwell in the Latrobe Valley of Victoria, home to the major electricity generating plants of Hazelwood, Yallourn and Loy Yang.  Unsurprisingly our collection has a strong emphasis on power generation, industry and the employment of natural resources.

Here are just a few examples of artworks from our collection that elaborate on this theme. 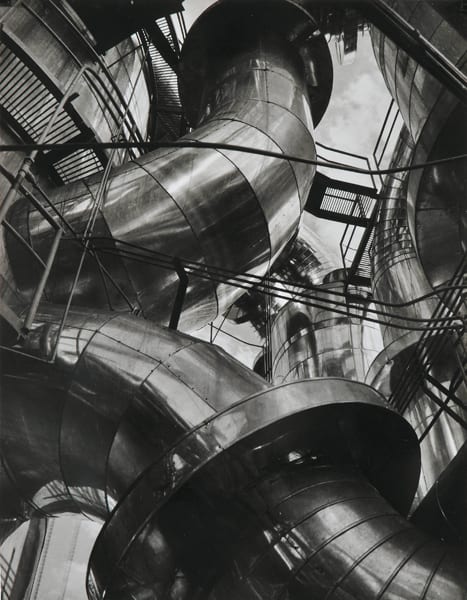 Fleeing Germany after being conscripted to the Luftwaffe as an aerial photographer in 1938, Sievers first went to England then Portugal before arriving in Australia in 1939. After serving in the Australian Army from 1942 to 1946, Sievers established a photographic business specialising in architectural, corporate and commercial photography. His industrial photographs are highly theatrical with workers often staged in poses. He often photographed industrial scenes at night using artificial light to lend a more dramatic scene. Sievers was a highly influential industrial and architectural photographer in Australia. The National Library of Australia holds more than 50,000 negatives and transparencies by the artist.

Ethel Spowers was born into a wealthy family with a mansion in Toorak. This wealth enabled her opportunities to study in London and Paris as well as at the National Gallery School in Melbourne. Her early work featured fairy tale drawings influenced by Ida Outhwaite, but her studies in 1929 in London where she was joined by her friend, fellow artist Eveline Syme, saw her develop an interest in modern linocut and her style changed dramatically. Her new dynamic forms and lines found a subject with the power stations at Yallourn. The power works were a provider of employment and hope against a background of the Great Depression. Ethel Spowers reportedly destroyed much of her artwork late in her career, with her surviving prints now highly valued. 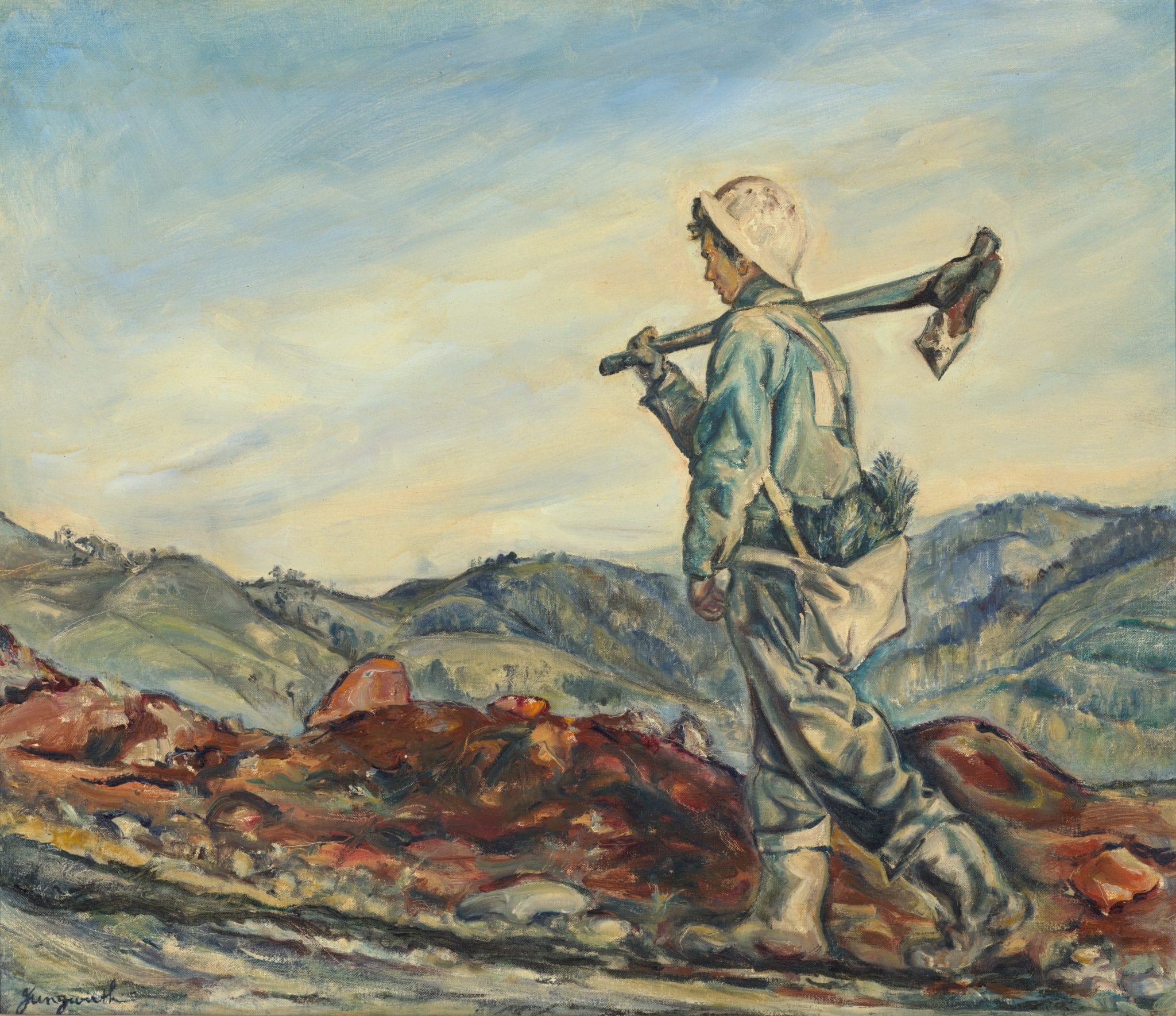 Gippsland artist Betty Jungwirth was active from the 1950s through to the 1970s. This painting “A.P.M. Forester, Pine Planter” was painted late in her career. Jungwirth was a ‘Social Realist’ interested in painting and depicting the lives of the working classes. In this painting, note the stoic pride and the pragmatic march forward of the man as he goes about his work. Betty Jungwirth achieved some national prominence with her shortlisting for the Wynne Prize at the Art Gallery of New South Wales in 1962. 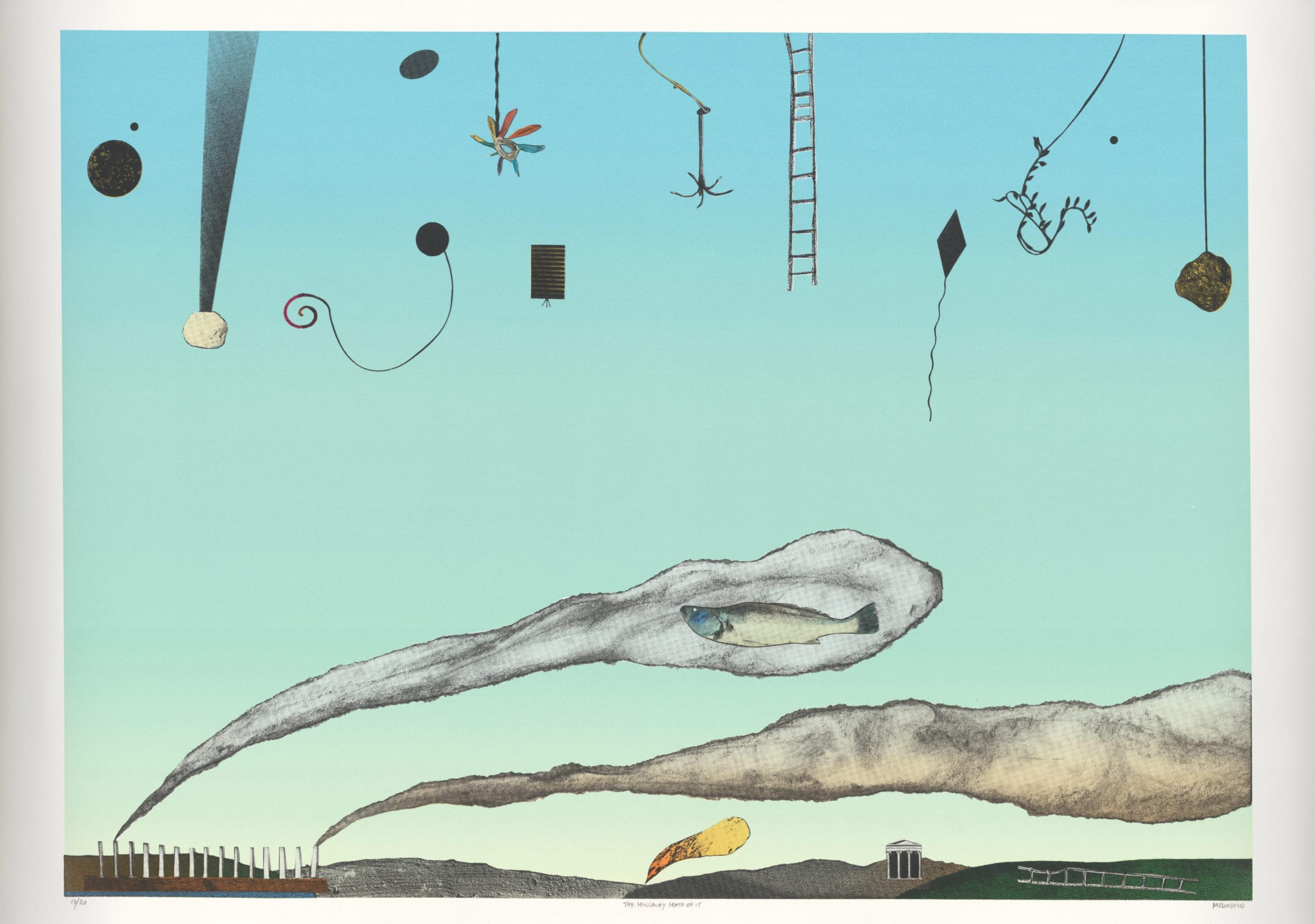 Yallourn is Danny McDonald’s boyhood home. In his art work he uses personal symbols slung puppet like on a stage like setting to talk about mankind and the environment. In this work rising collage clouds come from one dimensional chimneys creating pollution and damaging our world. The ladder symbol could be interpreted as the impossibility of our ascension over the power of nature. The artist is represented in national and international institutions, including the National Gallery of Australia, the National Gallery of Victoria, The British Museum and the Royal Museum of Fine Arts, Belgium. 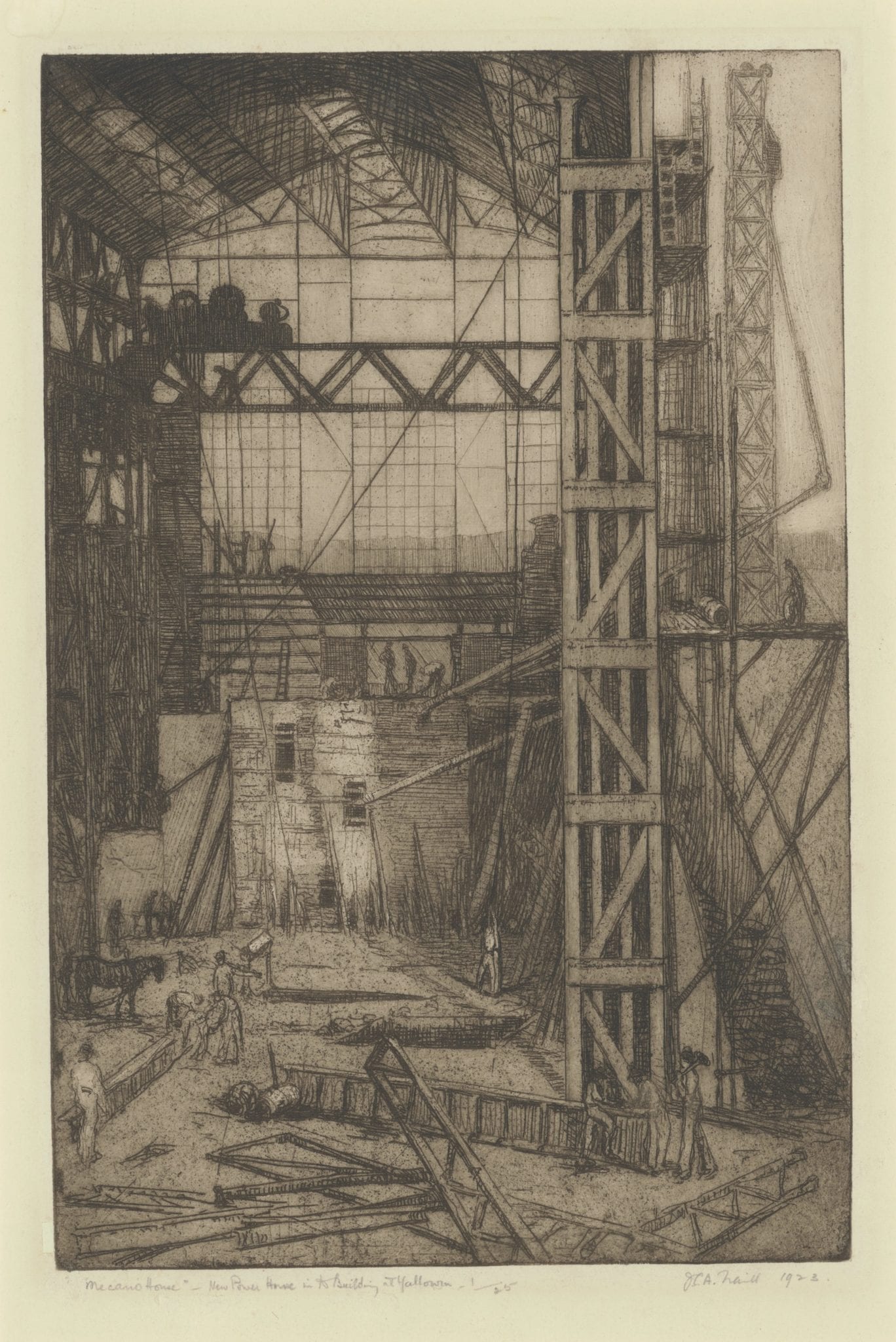 Critic and art historian Sasha Grishin describes Jessie Traill as “one of the great Australian artists of the 20th century”.

Jessie Traill produced a number of distinctive etchings especially of dynamic industrial imagery. Traill was interested in the progress of modernity, which she celebrated in works such as this one from Yallourn and her famous series Building the Harbour Bridge of 1927-31.

Born in Melbourne to a wealthy family, the young Jessie Traill befriended artist Tom Roberts, who encouraged her to become an artist. After extensive travel in France and England, she commenced art studies at the National Gallery School from 1901 to 1906 and was taught by the Australian impressionists Frederick McCubbin.

Jessie Traill stopped producing etchings in the 1930s and spent her later years at her cottage near Berwick. Her prints were the subject of a retrospective exhibition at the National Gallery of Australia in 2013. 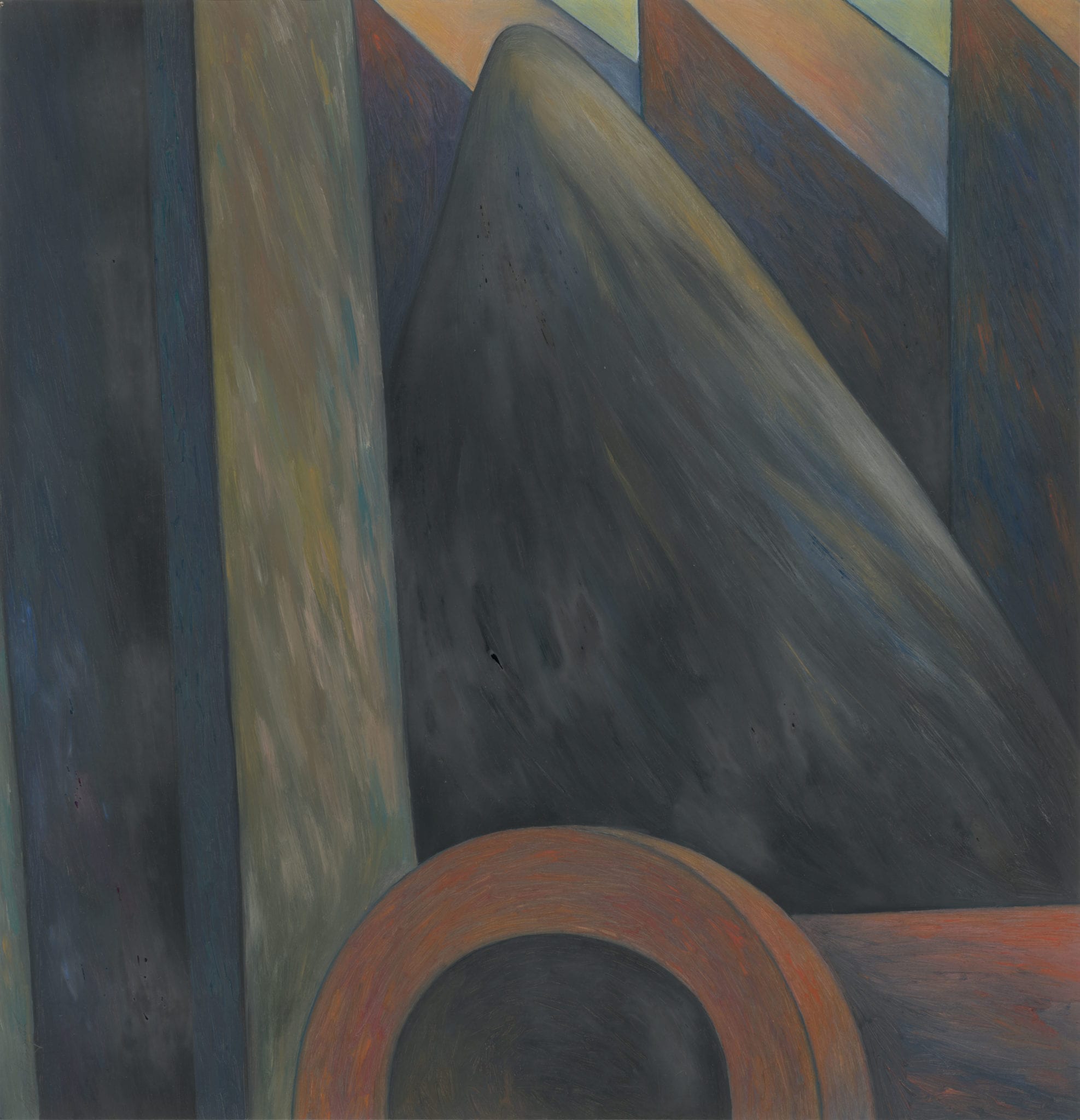 Euan Heng lived and worked, in the Latrobe Valley from 1982-1987. The artist’s pieces derive influence from the industrial landscape, power stations and surrounding areas. Jeeralang, a small town near Morwell is the site of a gas powered power station. Heng’s work often uses forms like Leger to create pantomimes in which the real and imagined collide. Heng crafts shapes and forms seen in the world to create something else, another way of seeing the scene. 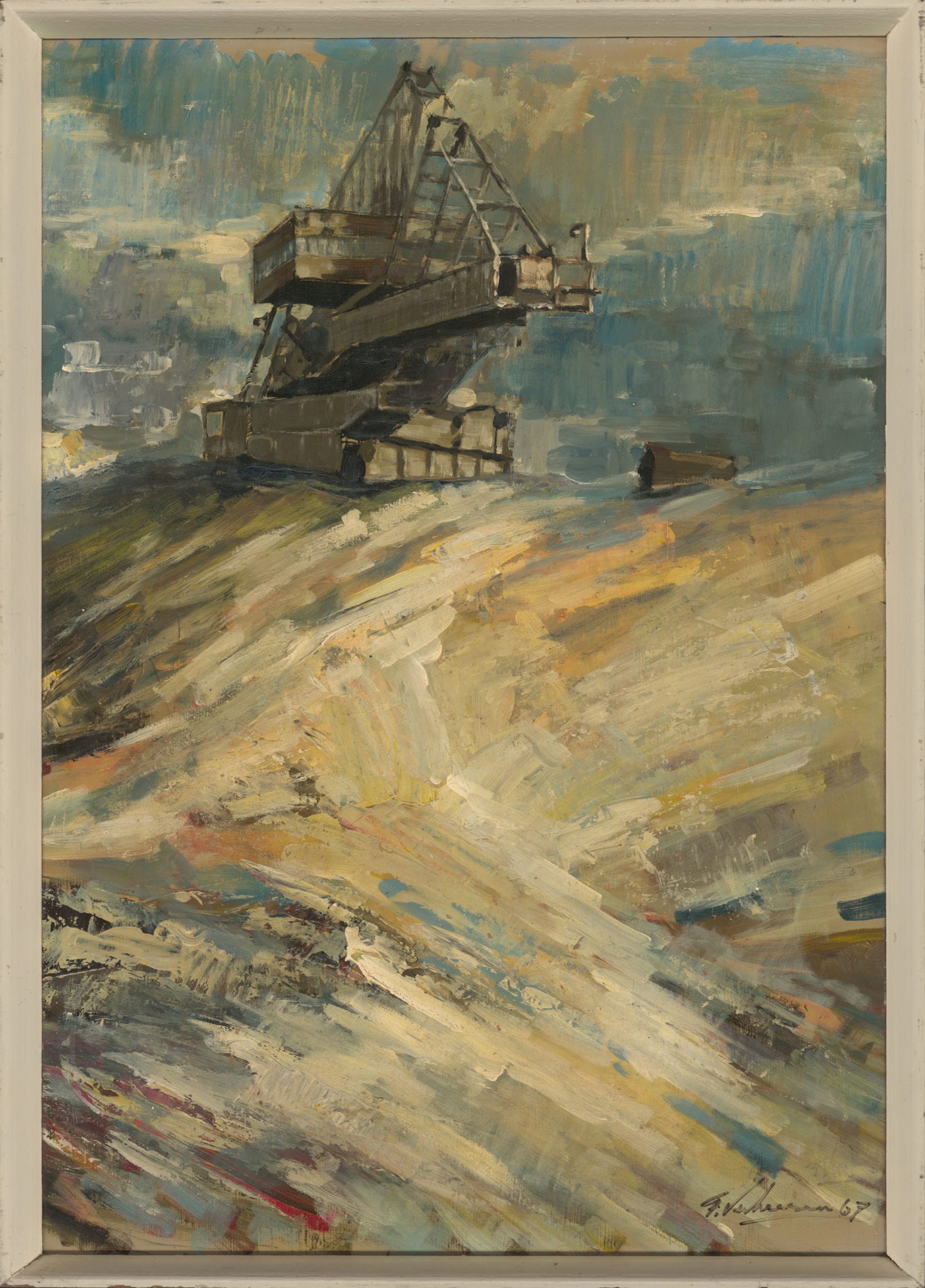 Born in the Netherlands, Franz attended art school in Antwerp, Belgium from 1947 to 1948 and in 1961 moved to Australia and lived in Morwell. It is believed he worked as a painter and decorator. There is not much information readily available about Franz Verheesen. If you have information about Franz and his art please get in touch.

While not a resident, Mandy Martin has spent a lot of time in the Latrobe Valley. Many of the artist’s paintings have been concerned with the relationship between technology and nature. She takes the sublime tradition of European painting and re-invigorates and updates it with a powerful response.

Mandy Martin is both appalled and fascinated by the immense structures that stretch across the landscape. Martin delights in the steam and smoke to suggest energy, power and movement however her paintings are an enquiry on progress.

This painting, which is only one of a number of paintings by the artist in our collection – is large like the land itself and tells the tale of industry and its incursion on the natural world. 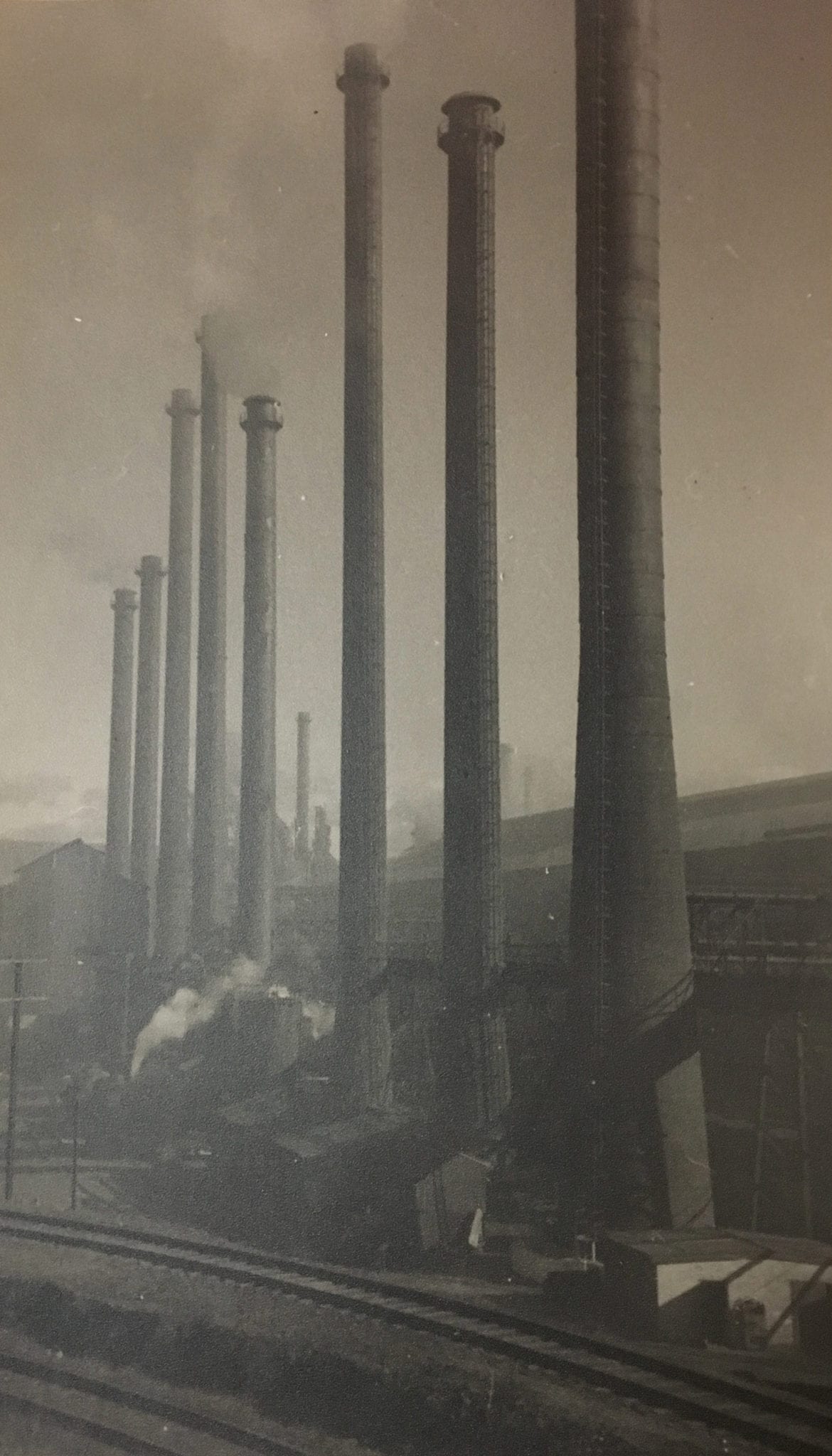 Born in Sydney, of French parents, Mallard used his French connections, to secure a position in 1900 with Harrington (later Kodak Pty Ltd) as a sales representative to the French consulate. He remained with the company, becoming general manager, until 1952. With ready access to equipment and materials he was an enthusiastic amateur exhibitor by 1904. Mallard used his business and connections to support other photographers, including Frank Hurley official photographer to Douglas Mawson‘s Antarctic expedition. The artist is best known for his ‘Pictorialist’ style of photography especially those of the construction of the Sydney Harbour Bridge.